. The 7 Habits of Highly Effective Filmmakers

WHAT MADE ME CHOOSE TO READ AND WRITE THIS BOOK REVIEW?

After having so many people recommending me this life-changing book I knew I had to check it out for myself. I downloaded the audio version of a book called the 7 habits of highly effective people by Stephen Covey and decided to give you a book review which I’m calling “The 7 Habits of Highly Effective Filmmakers”. I hope you enjoy.

This book is one of those motivational personal development books that I think everyone should take the time to read or listen to because it is very mind-blowing and helpful.

The seven habits Stephen Covey talks about is

HOW CAN WE BE PROACTIVE ACCORDING TO THIS BOOK?

This is a lot easier said than done. What I learned from this audiobook is that we should try to not procrastinate as much or spend too much time doing things that won’t benefit us. One example of this is complaining. You would be surprised how on how much time we waste complaining. Instead maybe use all that energy and time to be more proactive.

The way this method relates to the film industry is by learning to be smart with your time and manage it wisely. The film industry requires to invest a lot of time to film and edit, especially for those filmmakers who are also storytellers, they need to have creative discipline where they are able to make time to sit down and work on their movie idea or project. So we really shouldn’t leave everything until the last minute – because it will never get done.

A personal example about this is when I want to go to the gym or finish my projects right away, I still would wait to do them and put not proactive things in my life before those proactive decisions. Having a strong proactive mindset will change the way you live in a great way because if you stay hungry to grow as a personal and business level you have to always try to have a proactive mind.

Don’t procrastinate – instead be proactive!

WHAT DOES IT MEAN TO BEGIN WITH THE END IN MIND?

It means you always have what you want to accomplish in life in your mind! The more you see it the more you are able to work towards your goal.

When I was younger I’ve always wanted to be a photographer and a filmmaker. I always saw myself as a professional photographer and Filmmaker someday and always kept it in the back of my mind. There were a lot of obstacles in my way for accomplishing this dream – for instance getting money to go to a school or film school or people saying that it’s better to pick another career choice. I wrote a letter to myself when I was in 10th grade saying that someday I was going to be a professional photographer first and then a move on to being a filmmaker. I first began with trying to get better at photography by taking pictures and posting them on my personal social media outlets.

I would always have “It would be great to someday make my hobby a job”  – fast forward 3 years and I became a freelance photographer. By keeping it on the front of my mind – it just happened naturally by having people who admired my work asking me to take their pictures and recommend my services to their friends and family.

My next step was to get my feet wet in the film industry. I even thought of quitting a couple of times but I always kept the dream of someday being a filmmaker in the back of my mind. So I worked hard for two years to save up some money and get into a film school, now I am currently enrolled into a great school for that profession and that would not have been possible if I did not constantly think about my goals.

Anything can be accomplished by working hard and always seeing the end in mind, constantly picturing yourself in the place you want to be will guide you to that destination.

WHY SHOULD WE PUT THE FIRST THING FIRST?

I’m pretty sure at some point we have all procrastinated in things and regretted it later on.. I’m guilty to this as well,…  That is why we have to work on our priorities first, maybe log off facebook, put the phone down until you get you what you need to do. This is also easier said than done but we need to learn how to have self-discipline

In life we have a lot of things to do but we have to make sure we always put the important things we need to get done first before anything else. In order to this, we need to manage our time wisely and focus on what we have to do.

In the film industry, for example, there will be many projects to get done! If we were to procrastinate a project and fall of track that would not only look bad but also hurt your business and lose the client’s trust. Another example of this would be in preparing for a video production shoot – the night before you need to get all of your batteries for your camera / lights on chargers. If you wait until the moment before your shoot to charge things up because you waited until the last minute you’ll have no camera batteries to make it through the shoot! Same thing with emptying memory cards – nobody wants to run out of memory space in the middle of recording.

HOW CAN WE THINK WIN-WIN?

Successful people want to see other people succeed while unsuccessful want to see others fail. In this part of think win-win, it talks about how helping others will help you. For example in the film industry, instead of writing a nasty review on rotten tomatoes to make people not want to watch a movie, maybe point out the parts you did like and focus on the positives.

Collaborating is always better than to be going against someone.

Another example is when YouTubers collab – you cross polinate your audience and you each gain new subscribers.

SEEK FIRST TO UNDERSTAND THEN TO BE UNDERSTOOD

This is a habit that you would want to do every single day. When filming a movie you don’t tell people “ hey buy my movie, I worked so hard on it”.

No one cares if you worked really hard on your film – everyone worked hard on their film!

The real question is, does it offers value to your viewers for them to want to watch it in the first place?

Like the old phrase, 2 heads are better than one. Filmmaking is a team sport that brings many people together. When working on a film set or recording video of anything – when you work as a team and collaborate with one another you create a beatiful synergy.

Filmmaking is an artform – one that you never make perfect. As creatives in the video production industry, it’s easy to think that we’ve mastered the basics whether that’s lighting a green screen, editing just the right cut, or directing our models to the best angles. The truth though is that you never reach perfection. If there’s anything you take away from the 7 Habits of Highly Effective people (or our adaptation “7 habits of highly effective filmmakers”) – let it be this lesson. Imagine two people in the woods – they both start out with an axe (or saw). At first they both are cutting quickly but over time the blades become dull. The wise man takes a pause to sharpen the saw – then goes back to work as fast as the day began. The foolish man just keeps doing the same thing with more effort – confused how the wise man is able to cut more wood while taking breaks (not knowing he was actually sharpening the saw).

In filmmaking – remember to pause – and sharpen your saw. When you get frustrated, when things just aren’t working, when you’re feeling stuck remember to stop and sharpen the saw.

If you remember nothing else about this book review – remember to Sharpen your saw!

I’m Vaida! At the time of writing this article I’m a film student learning to write and direct my own projects. I hope you enjoyed this article!

Get the 7 Habits of Highly Effective People on Amazon using the “Shop Now” button.

When you use our referral links you support our efforts to bring you insightful articles. Thank you for your support!

Read the book review of “Building a Storybrand by Donald Miller here”. 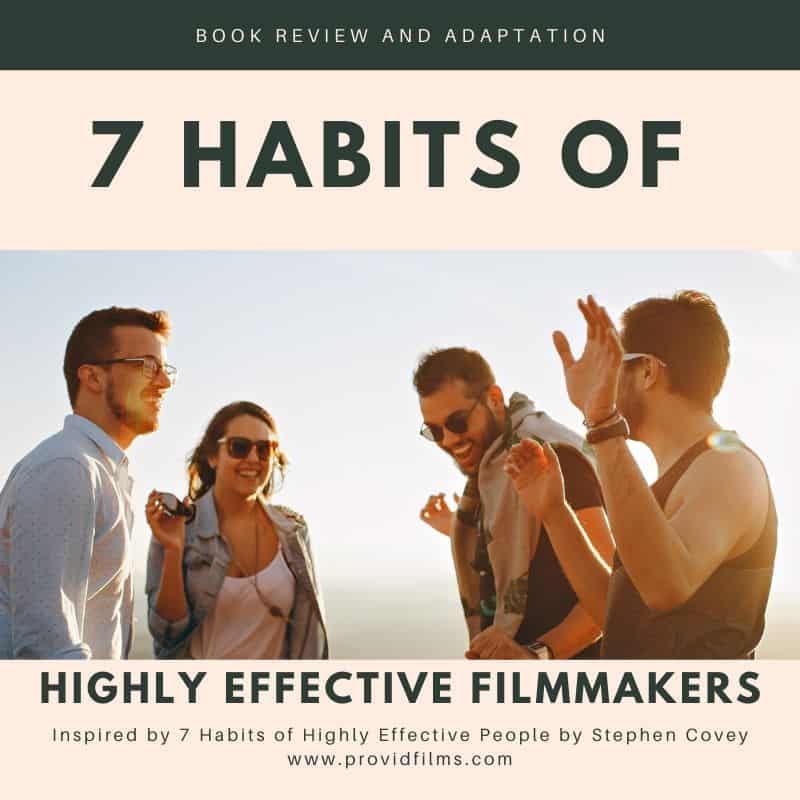 Do you have a question about filmmaking or video production?

Fill out the questionnaire below – in the project description just write your question!