Why is Metro PCS cheaper than T Mobile?

The secret to whyMetroPCS is so much cheaper than T-Mobile for cell phone plans.

GIf you were like me – wondering “Why is Metro PCS cheaper than T Mobile?” – I was wondering how MetroPCS can offer T-Mobile cell phone plan service without a contract at a fraction of the price – until my personal experience with trying to use them.

First off – let’s dive into the low cost carrier and my excitement – hopes – and dreams with a Metro PCS. As a frugal business person that I am, I like saving money. I also like nice quality technology (particularly smartphones). Bringing together nice technology with frugal cost saving is a challenge when it comes to affordable cell phone plans for a business.

As you can tell from the video above, the speeds of Metro PCS and T-Mobile are quite similar depending on the plans you are comparing.

Clearly I dont want outdated landlines that are not only expensive but clunky and unpractical for my needs being on the go. Previously having been on Republic Wireless – and a variety of carriers –  I’ve been used to cell phone companies that don’t have stores you can walk into for support. I’d actually prefer to just sit on the phone getting help versus standing in a store.

I was wondering “how difficult is it to setup MetroPCS byod (bring your own device)”?

Sinve I’m a bit of a techie I felt up for the challenge.

In short – the answer to “Why is Metro PCS cheaper than T Mobile” is their customer service is designed to be inept.

Before I dive too deep, if you’re considering buying anything T-Mobile related please consider supporting me by using this link to shop on Amazon. Seriously, it helps me out.

SPOILER ALERT: If you’re looking for a decent alternative to MetroPCS and don’t want to pay for T-Mobile as a single user, here’s who I use now.

Initially I was wanting to time my “switching to MetroPCS” from Republic Wireless with the end of my monthly billing cycle. Going from a $25/month cell phone plan to $30 per month cell phone plan it’s not much of a price difference but I figured I wouldn’t be able to get a refund for the unused days. Luckily – Republic Wireless actually does prorate and send you a refund in 3-5 business days.

You’ll get sick of the “3-5 business days” line after a bit.

So I stopped into my local MetroPCS dealor (well, the local actual store not Walmart). The guys at that location of Metro PCS in Blaine MN (9846 Polk St NE, Blaine, MN 55434 (763) 432-2941) were actually super nice. While slow (more than an hour from when going in until leaving), they were friendly and did the initial porting of my number to them and selling me a Smartphone with “switch and save” price reduction. Not a bad way to get a prepay smartphone for not a lot of money.

All that aside – my plan was (and I explained to the manager and nearby customer rep) to activate a phone with simcard and then transfer that plan to my unlocked LG G3 with 32g storage, 4k video camera, and MicroSD card which is pretty much the best cell phone for listening to a lot of podcasts (back in 2013). (Which is the main reason I left Republic in the first place – the inability to have a premium phone with microSD storage).

After the initial 1-2 hours in store, I was told Republic Wireless had registered my number as a home phone and would take 3 to 5 days for them to port over my number. At the very last hour of 5 days they finished the porting of the number.

In store they successfully gotten the new phone they sold me to send calls and get a data connection – but I was told texts and incoming calls would come to my old device (Moto X – original 16gb).

Speaking with customer service on the phone (before going in to the store) I learned that I was supposed to just call customer service back when I had the new phone and they’d add my IMEI (sim card and phone device number) and activate it with new APN Settings and it’d be all good to go (as long as my phone was unlocked – which it was).

After swapping out the sim card I had issues – phone was not getting any data or being able to send texts. I could make calls (which was a sign that the SIM Card was indeed inserted normally). After numerous (no less than 5) calls with customer service and resolving the data issues (literally over 3 hours on the phone over a few days), I was told new changes were made and that I needed to wait another 48 hours. Nothing could be done until then.

Woohoo – 48 hours later still not fixed. Having spent well over 3 hours trying to fix the issue – I was instructed to update some MetroPCS APN Setting with T-Mobile APN Settings. This fixed the internet issue but I still could not send texts (either mms or basic texts)

What’s the solution despite spending on-and-off from morning until the afternoon with customer support?

In order to speak with a support technician they had to fill out a support request and I should expect to wait 3-5 days – at which I will get either an email or call. I’m told not to lose my MetroPCS support ticket because the number is very important.

Over these days and days and hours and hours did I ask for manager? Yes. Of course. And they don’t have anyone above them that can help.

So why is MetroPCS cheaper than T-Mobile?

When you pay the premium price with T-Mobile, you get customer service that can escalate an issue up the foodchain of command.

Spoiler: Ultimately I used the information I’ll share with you below here to get MetroPCS to work on my unlocked phone – but it took literally DAYS of my time to find this information. So if this info helps you – share a link to this page somewhere online to help others. Whether that’s social, Reddit, wherever.

If you’re wondering how to get text messaging to work with MetroPCS and need APN settings – try the combination below in the table.

I’ll just see how many days it takes now for them to get back to me with the support ticket. #3to5businessdays #metropcs

While I had managed to figure out the texting issues myself (see the APN settings above if you’re having issues texting with LG G3 on MetroPCS), I have no clue if I did all of the necessary changes or not. 6 Business days later – still no call from technical support.

I learned that since their system had detected my sending texts, they closed out the technical support request (without ever letting me know they’d closed it out) and that’s why I’d not heard from technical support.

Oh, I’m probably getting ahead of myself. Why was I on the phone with technical support – why did I call them now 90 minutes ago and why is technical support so horrible at MetroPCS? I’d received the message that my 4g data was all used up and trying to upsell me on $5 add on for 1gb of 4g data. No thank you. When I was switching from Republic Wireless to MetroPCS, I had previously been on the 3g only data plan. I was getting about 1-1.5Mbps on 3g and was told I should get about 900kbps on MetroPCS. Not horrible – still attractive because it’ll stream video (unlimited) and allow unlimited tethering…

Turns out though I was getting 120kbps – and that was a throttled 4g (not 3g) data connection. It was not kicking me off of 4g, rather it was just throttling my connection speed. Throughout the 90 minutes trying to sort it out, the answer was that my slow connection was normal since I was on a limited 4g data plan. Sorry, 120kbps is not a “normal 3g connection speed” MetroPCS.

They were taking the fast 4g connection, giving me a connection that could easily handle more data and then just telling me it’s equivalent to the normal 3g connection speed… and saying there’s nothing they can do.

The fact they show me using 4g connection – and they are just throttling me – and they’re willing to upsell me more data which would unthrottle now to faster speeds… but saying there’s a technical limitation of my data connection… Double speak!

That’d be one thing if it said I was connected to 3g towers – but when it went from numerous Mbps to now 120kbps while sitting at home talking with technical support and testing things – while still connected to 4g – that’s a deliberate throttling and not a technical 3g throttle.

As a temporary solution they offered to give me a one time 1GB high speed bonus credit. My thoughts: I don’t want 2GB of high speed and then have my internet die (120kbps makes my apps not even work which used to work perfectly fine on 3G with Republic).

After mentioning a blog, the customer rep escalated the call to her manager John – 304640 which offered $10/off my next bill – and would look into making it high priority “on this” support ticket so they can try to fix it “as soon as possible”. He then hoped that I’d hear from technical support within the allotted 5 days (but remember, that’s really 7 days when you include the weekend… oh well, I suppose customers cut you more slack when you tell them 5 days since that’s kinda correct… except why not clarify to customers 5 business days? Ugh…)

So here we are, learning about why MetroPCS is so much cheaper than TMobile again – in two words – customer support.

Hopefully that answers your question: “why is Metro PCS cheaper than T Mobile?”

Wow – it’s been a hot minute since venting in this blog post.

If you want to check out who I’m using since 2019 and have been actually pretty happy with, click the photo below to check coverage in your area. It’s pretty cool paying once per year for my phone bill. 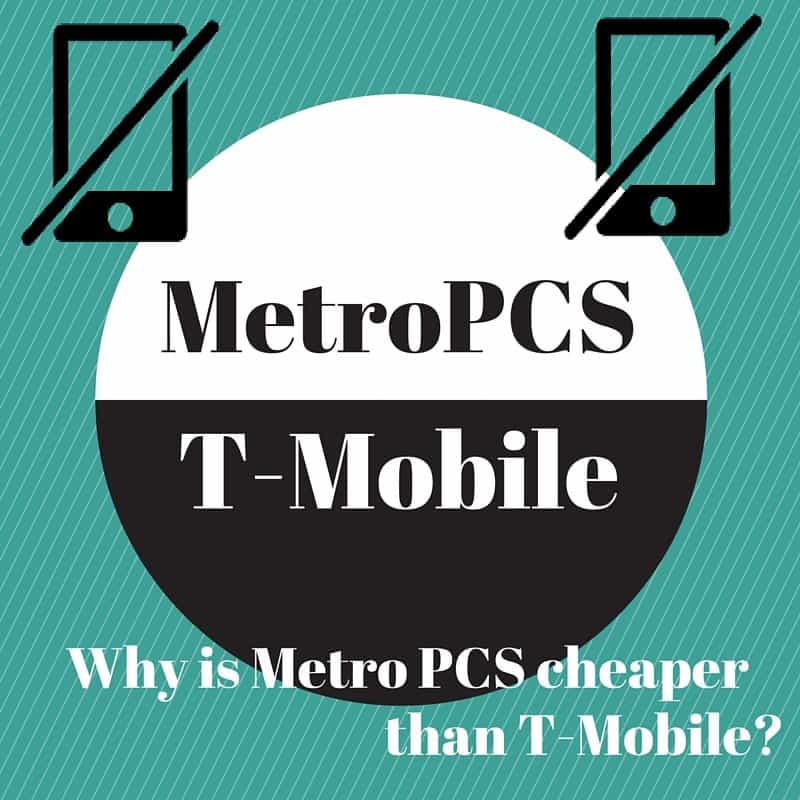 “Notice on Trademarks: “MetroPCS” may be a registered trademark. The references on this website to MetroPCS are for informational purposes only. This website is in no way affiliated with MetroPCS.” verbiage from the Tidrick Law Class Action Lawsuit filed against MetroPCS.