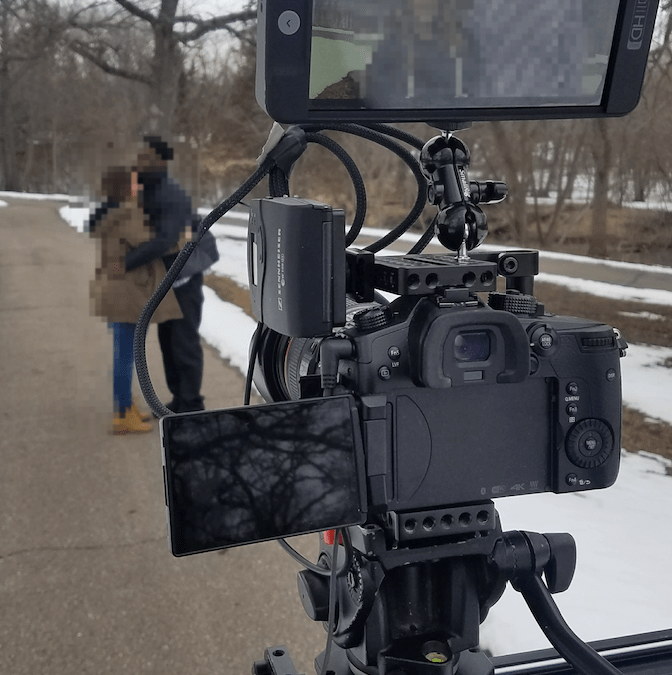 Having used and now owning both an FS7 and GH5, I can say they both have their place in today’s video production company. We’re often making small business videos that don’t involve a giant crew and the GH5 (matched with a Metabones Speedbooster so the sensors are a very similar effective depth of field and focal lengths) produces some of the best we’ve seen in small cameras.

One of the most overlooked parts of the GH5 versus the FS7 is how easy it is to dial in perfect color in camera. We use Cine color profiles and set manual white balance using the very ergonomic JOYstick. I say joy-stick because coming from every other video camera out there – it is a JOY to use. There are fixed buttons on the GH5 for ISO & WB along with dedicated wheels for iris and shutter speed without taking your hand off of the grip. Take that Sony…
You can literally set a custom white balance with one hand dialing in the kelvins then doing color shift with the joystick without diving into menus.

Add on top of that the new 400mbps 4k codec, unlimited record time, affordable SD memory cards that aren’t tied to just a handful of Sony brand cameras and the magical IBIS…

Turning your cinema lenses into stabilized lenses without giant gimbals?

Here’s a sample video  mixing both camera footage – can you even tell which camera did which clip?

The downfall of the Panasonic GH5 versus the Sony FS7?

Honestly, the biggest downside we see is just the client perception when working with larger clients. The bigger camera is heavier – bulkier – it has built-in XLR (although the GH5 has a dedicated XLR1 module and there are quality pre-amps like the JuicedLink XLR module). The FS7 has a larger battery and built-in ND filters which are nice perks for long-form video projects like seminars.

Perception is reality (sadly) and most companies we work with would rather have an FS7 than a GH5 because they just feel it will be a better video in the end. When they get comfortable with us throughout the project and we suggest actually using the GH5 due to 4k 60p and more stable imagery… They are already working with us and trust us.

Starting out – we are able to more easily differentiate from the newbies who have a photo camera that also does video… Despite it’s pretty clear that NOBODY actually buys a GH5 for the photography alone. There are many cheaper m4/3 cameras – people all buy the GH5 because of the video – with the added benefit (or required functional requirement) of hybrid photo and video coverage. Example: we go film for a day in a factory and they want us to take a group photo of their team. Do we carry an FS7 and a Canon DSLR? No – just grab the GH5.

Yes – I’m skipping over some advantages of the FS7 – but I’m trying to point out how the GH5 compares to the FS7 in terms of its advantages for some situations. Often video guys say “the FS7 is better – case closed” when in actuality that’s not always the case. Even when the price isn’t an issue – there are times the GH5 just is a better choice – and there are cases where the FS7 is a better choice.

Either way – both cameras have their place and the price difference is now less than ever. The question is to whether you’re requiring any certain feature over another – if you don’t shoot with a gimbal or stabilized lenses – I’d say the sensor stabilization will factor hugely into your equation for useable shots and being able to shoot with a monopod to get solid footage. If you do agency work – an FS7 may help you win some jobs – and it’s easier to rent out your FS7 to get it paid off faster as well – or bring it within your day rate to recoup the cost difference on projects you’re already shooting – or get jobs just because you have the Sony fs7.

If you exclusively sell the end video (never raw footage or sub-contracted) the client will probably never know the difference and I’d say the stills camera + 4k video in a small form factor outweighs the big camera. The client will love your great video quality at affordable freelance videographer prices versus the bigger camera budgets.

So – it’s a bit of a draw. Depends on what you’re using it for.
Which – to be honest – is crazy. It’s crazy that you can now compare a camera 1/5th the size and cheaper in terms of image quality and usability.

Keep shooting guys – ultimately gear is just a tool to get you the shot – and the shot is only as important as the story your film is telling.